In part one of the Pastorless Church, we took a look 1 Timothy 2:8 which addressed the public assembly of the church and how men (males) are called to lead prayer. This should be done without dissension, disputing, full of faith, with a blameless life towards God. We’re now going to look at the exhortation to women.

Likewise also that women should adorn themselves in respectable apparel, with modesty and self-control, not with braided hair and gold or pearls or costly attire, but with what is proper for women who profess godliness–with good works (1 Timothy 2:9-10 ESV).

A key word here is “likewise”. It implies that just as men have their roles and proper conduct in the church assembly, so do the women. This is such a blessing if we understand the times. Women were often treated as second class citizens. In Jewish gatherings, they were not even allowed in the congregation of the men of the synagogue but were separated by an outer court. Yet in the context of the Christian church, they are a part of the body public with the men. It’s a silent statement of the reality that they are co-heirs with Christ like any man (1 Peter 3:7).

The part of Paul’s address we’ll hone in on today has to do  with how women should present themselves in the church. This is important for three reasons. 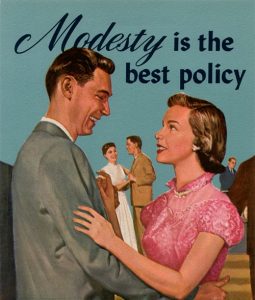 One is that the adornment of flashy apparel and plaited hair (more likely adorned with some kind of jewelry like gold and pearls) was a sign of loose morals. Prostitutes wore similar clothing. It would be the equivalent today of having bright makeup, large jewelry, and revealing clothing like mini-skirts and blouses where the cleavage looks like it’s screaming to escape.  The assembly of the church is not a fashion show. This is not about impressing others but presenting ourselves to God.

Secondly, dressing in that way was suggestive that the women were independent of their husbands which false teachers propagandized.

Thirdly, it was and still is a stumbling block to the men of the congregation, something that we as Christians should be cognizant of with others whether they be of the opposite sex  or not (Romans 14:13). I believe there is an inference here that men should accordingly do the same with women. Though the context here is within the church, the inference extends outside of the church as well.

Women are then encouraged to have self-control, a fruit of the Spirit (Galatians 5:23) by clothing themselves respectably. It’s not suggesting that women wear a burlap bag (which also draws its own attention) but that their apparel should be one that doesn’t draw attention to herself with gaudy jewelry and clothes and if any beauty is seen it is the godliness of her character and conduct as a woman and child of the living God.

In part three, we’ll look at the manner in which the women are to learn in the church assembly.