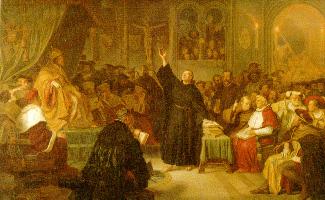 In a day an age of relativism and feel good teaching in the church, you’re hard pressed to find those who would stand for truth unabashedly, come what may. Those kinds of men and women are hard to find anymore. But one man that stood by His convictions and the truth of the scriptures did so not realizing the impact he would have on the world as God used him. His name was Martin Luther.

To this day, Martin Luther’s name evokes generally one of two images: a great man of God or a heretic. He stands in good company, most markedly, the Lord Himself.

Most Christians are unaware of Luther’s full history or completely ignorant of who he was. To get a glimpse into the man, we’ll go to one of the most pivotal moments of his and the church’s life. The Diet of Worms, which actually means the assembly (diet) that took place in Worms, Germany, 1521. Luther had nailed his 95 theses to the church sanctuary at Wittenberg in 1517 laying out why the church doctrine on indulgences was wrong, another pivotal moment in church history because it was at this moment that it is generally accepted as the beginning of the Reformation and the Protestant defection from the false church. From that moment, the movement began to build across Germany and beyond. Luther wrote books outlining the fallacy and error of the teachings and doctrines laid out by the false church that existed and people were listening. This was unacceptable to the heads of the church and state and Luther was summoned to Worms, Germany to explain himself.

It all came to a head at the Diet of Worms. Charles V along with several ambassadors, deputies, bishops, and princes sat in anticipation to hear Luther’s explanation in a packed room of onlookers. Dr. Johann Maier von Eck was the representative of the archbishop’s court. In the middle of the room was a pile of books, Luther’s writings. Eck asked if the books were indeed Luther’s and if he would recant what was written therein. Within his reply, Luther stated:

The books are mine. I deny none of them.

He then asked for more time to answer the question as to whether he would recant what he had written. He was allowed and the next day, he replied with well thought out answers. During his reply, he laid out the contents of the types of books he had written. He said of his work against the papacy:

The second class of my works inveighs against the papacy as against that which both by precept and example has laid waste all Christendom, body and soul…Yet the canon law provides that the laws and doctrines of the pope are contrary to the gospel and the Father’s are to be held erroneous and rejected. If therefore I should withdraw these books, I would add strength to tyranny and open windows and doors to their impiety, with which would then flourish and burgeon more freely than it ever dared before.

Dr. Eck, unimpressed and a little incensed by the response said:

Luther, you have not answered to the point. You ought not to call in question what has been decided and condemned by councils. Therefore I beg you to give a simple, unsophisticated answer without horns. Will you recant or not?

Luther understood that this was it. So, he boldly replied:

Since your Majesty and your lordships ask for a plain answer, I will give you one with either horns or teeth. Unless I am convinced by scripture or by right reason-for I trust neither in popes nor in councils, since they have often erred and contradicted themselves-unless I am thus convinced, I am bound by the texts of the Bible; my conscience is captive to the Word of God. I neither can nor will recant anything, since it is neither right nor safe to act against conscience. God help me. Amen.

There are times in our lives as God’s people where we have to make a decision. As Peter and John said in Acts 4:19:

But Peter and John answered them, “Whether it is right in the sight of God to listen to you rather than to God, you must judge, for we cannot but speak of what we have seen and heard.”

If we are to be true witnesses of God then we must stand for what God has said as the final authority on all things, no matter what because in the end, we stand before God alone and not man.