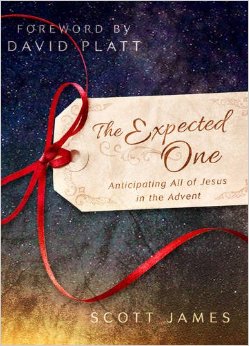 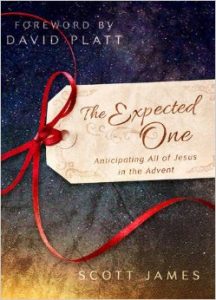 This past Christmas season, my family decided to get deeper into the Christmas celebration by celebrating the Advent. I did quite a bit of research about the candle lighting but I already knew about the Advent and what is was. For those who may not be familiar, the Advent is the four weeks prior to Christmas that look commemorates the coming of the King of kings into the world, Jesus the Christ. It is tied to the Epiphany which is a commemoration of the three kings coming to give gifts to this King being the first Gentiles to which the King had revealed Himself which happens on January 6th. There is a lot of rich heritage for Christians around that time of year but Protestants are by and large unaware of significance let alone actually celebrate it. Our household wanted to break that cycle this year.

In preparation for this, I bout a book by Scott James called The Expected One – Anticipating All of Jesus in the Advent. It was a small book and I thought it would be perfect for focusing on the coming of the Savior of the world. To an extent, it is. But there were a couple of things that I was not made aware of until after I started in on the book.

The first is that the book is mainly for families with little children. The format is that there is a Scripture for the day, a small summary on that Scripture, and then questions to answer related to the Scripture. These questions are quite rudimentary and they have answers embedded at the end of each so that you can guide your children with a proper perspective. It is a family devotional at Christmas.

The second was that many of the verses really didn’t relate to the Advent at all. An example of that was Isaiah 53:5-9. That has nothing to do with the Advent. It’s related more to Easter than the Advent. The connection is nebulous. All the Scriptures had something to do with Jesus which is fine but the idea from the title was that there was supposed to be an anticipation of immersing yourself or your family into this celebration. That was the let down of the book. Instead of really focusing on the Advent and expanding more on verses that related to that, there was a sweeping summary of Jesus birth, life, sacrifice, and resurrection. Like I mentioned, there is certainly nothing wrong with that but that’s not the impression was that it would lean more heavily on the Advent.

Along with this were a few things that was questionable. In the questions for discussion for that passage of Isaiah 53:5-9, it’s asked “can you think of soomething about His death that was even worse than that?” The Answer is that Jesus had to take the wrath of God. And then an assumption that has no biblical basis. He says for an answer:

Accepting the punishment of God’s wrath for our sin was worse than any pain imaginable.

Well, that’s speculative at best. We don’t know that and if I were to extrapolate anything from Scripture it would be that the connection between the Lord Jesus and His Father was the worse pain that was imaginable to Him. To have to be separated and rejected from His Father who He had been one with from the beginning. But again, that’s speculative at best though it may be inferred.

Another place where an answer is given is in the answer on Psalm 16:10 where the question of whether Jesus’ disciples would have been surprised if they had remembered the verse about the empty tomb. The answer:

No, they would have realized that an empty tomb is exactly what God had promised.

Again, that is speculation and can’t be supported by Scripture since there were things that they did remember but still didn’t believe. These kinds of conclusions really doesn’t help to teach people about the Advent as well as the truth about Scripture, children or not. It actually skews it a bit.

Overall, the book is not bad. It’s a book you can give to someone who doesn’t know much about Jesus or a young Christian. But as a family devotional, it’s rather lacking in focus on the subject expected which is the Advent. You may also want to edit some of the answers as they are more than a few that present speculative conclusions. Or just find another book about Advent.