This year marks the 500th anniversary of the Protestant Reformation which began in the 16th century in the year of 1517. It is synonymous with the 95 theses that Martin Luther nailed to the Wittenberg College doors that sparked what is still going on today. Yet there has been many people who say that the Reformation is not a big deal anymore and that we just need to leave that alone and move on. But when we look at the theological climate of our time in the church, excluding those who have no interest in the church, what we begin to see is that a Reformation is gravely needed and that that Reformation needs to be done in the Protestant church.

In the State of Theology Survey which was done by Ligonier Ministries and Lifeway Research, there were some startling revelations that signaled a grave ignorance of the Bible, God, Christ, and truth in general. Here are some of the findings:

This is simply incredible. On the one hand, it is very despondent. People are not becoming more biblically sound with the wide amount of access to the word of God but they are becoming more and more biblically ignorant. One of the reasons for this is that there is a widespread belief among evangelicals that church attendance is an option. The survey also found that those who attend church on a regular basis tend to answer those questions in a biblically Orthodox manner.

Why has the state of theology taken such a downward turn? I don’t think that you can point out just one thing that is the reason but there is an amalgam of many things from the deification of science, to the acceptance of deviant behavior, to the jettisoning of the study of the Scriptures themselves. I found that the more I encounter and talk to people about the truth of God and what the Bible actually says about things, the more I know that there is a lot of work to do. It is quite true and especially more so today that the harvest is plenteous but the laborers are few.

The Reformation is still going on and we still need to shout from the rooftops who God is according to his word. We are living in a time of famine for the word of God and God himself has told us that this is what was going to happen:

Behold, the days come, saith the Lord GOD, that I will send a famine in the land, not a famine of bread, nor a thirst for water, but of hearing the words of the LORD: And they shall wander from sea to sea, and from the north even to the east, they shall run to and fro to seek the word of the LORD, and shall not find it. (Amos 8:11-12) 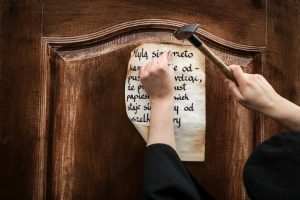 On this 500th anniversary of the Reformation —which is on October 31— don’t go out pounding on doors with children as they say silly phrases that mean nothing and celebrate darkness. Spend that time celebrating what really matters. Celebrate the ultimate knocking on the door of Martin Luther and the nailing of the 95 theses to that door at Wittenberg. Educate people on how important that is because it’s needed. It is sorely needed.