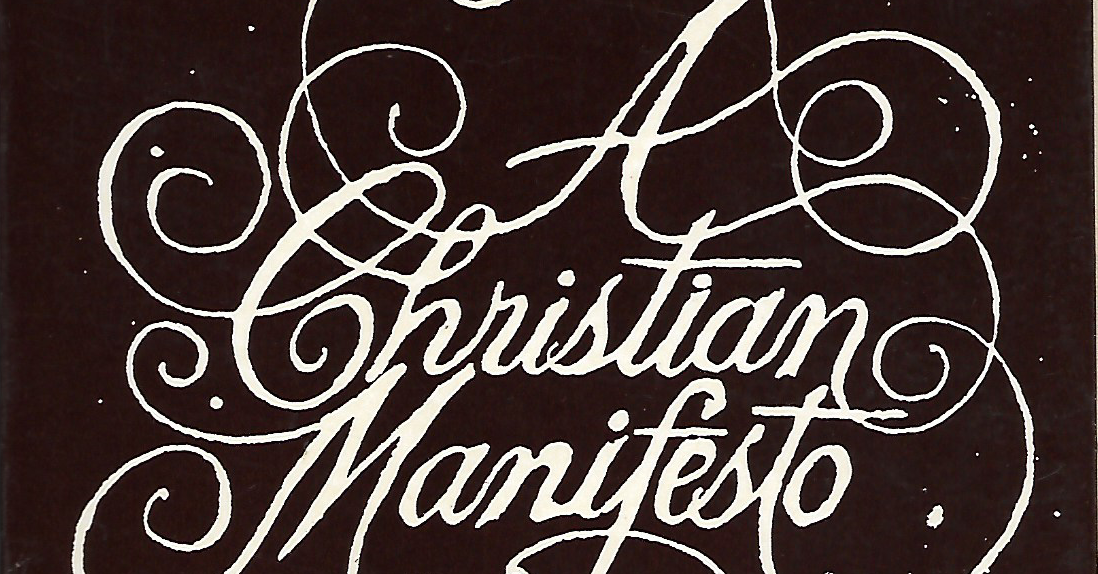 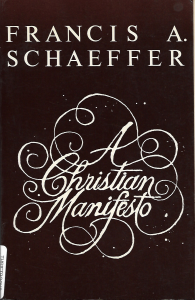 A Christian Manifesto is a book I endeavored to read back when I first became aware of Francis Schaeffer in my Christian walk 20 years ago. It wasn’t until now that I was able to grab a copy of the book and make my way through it. All in all, don’t let the amount of time that it took me to get through the book fool you. The actual time it took me to read the book was very short.

A Christian Manifesto is the response to the Humanist Manifesto of 1933 and 1973. He lays out profound truth in terms of the societal change of worldview and where that will lead us ultimately. It is a call for those who are the followers of Jesus Christ to stand up and fight in a necessary way by the necessary means that a Christian has in a Democratic Republic society.

Schaeffer takes us on a history lesson in terms of America of how our laws and nation were formed, making a reference to Lex Rex from Samuel Rutherford. That it wasn’t on a whim that the American Revolution took place but that it was an outworking of the Reformation. He then goes on to state how all of the Christian’s reality should be influenced by the faith which they espouse. This is a profound and often missing element in the Christianity that is presented to the world today. As he states on page 19 in the chapter The Abolition of Truth and Morality:

This then forms the basis for the rest of the book in laying out an argument for a Christian’s measured and balanced involvement in the social and political climate of the day. Though this was written in 1982, everything within it applies to today. It’s prophetic and timeless in that respect.

One of the things that Schaeffer points out which is something that is lost in today’s political climate is the fact that no nation should be looked at as if it is representative of the Lord Jesus Christ. As Schaeffer points out on page 121 in Chapter 9, The Use of Force:

We must not confuse the kingdom of God with our country. To say it another way: “We should not wrap Christianity in our national flag.”

This is where a lot of well-meaning Christians get off on a tangent and the radical thinking of intertwining the church and state. The reason why we should keep those two separate is because they are two separate entities. One is holy and one is not. The church is the people of God and therefore that separation should be distinctive. This reality will not be possible until the coming of Jesus Christ when both are flawlessly and perfectly joined together.

The end of the book speaks of the call for civil disobedience when the state overreaches its power. This ties into the idea why the church should be distinct from the state. The state is not a body of God ordained people. It is only ordained as an institution for law and justice. But without the reign of Christ in the hearts of men, it will and inevitably fail and go in a different direction which is what it has done. Therefore, there must be a distinct body for the act of civil disobedience. Schaeffer argues:

If there is no final place for civil disobedience, then the government has been made autonomous, and as such, it has been put in the place of the Living God… It is time we consciously realize that when any office commands what is contrary to God’s Law it abrogates its authority.

This again is what has happened in our society today. Statism is making a full-court press and Christians in the United States of America are being persecuted more and more. We are being silenced in the public square as if what we say doesn’t matter at all. We are being looked at as what we believe is totally relevant in view of reality. Again, in this sense, this book is prophetic as it addresses this directly.

Schaeffer touches on some of the issues that were particularly hot during the time that he wrote it which was abortion, infanticide, euthanasia. This should sound familiar. Now we can add to that the homosexual agenda. It has not gotten better but worse and A Christian Manifesto is a book to remind us where our minds should be and how we should be involved in the process of promoting the worldview of truth that God is laid out in his word.

Overall, this is a good basic introduction to the idea of looking at all of life as something that should be affected by the faith we have as Christians. That we shouldn’t compartmentalize areas of our lives as being Christian and other things as being non-Christian but that everything that we do we do for the glory of God (1 Corinthians 10:31). It’s a quick read and worth the time to fill our minds with a balanced idea of how we should think and act in a secular society as the people of God.

On my personal scale of A through F, it’s falling somewhere between the C+ and B-.